Oppressors Come In Many Dark Colors

Are people ready not just for an honest conversation but an honest substantive conversation?
I say it like that because there is not only some difference but a very important difference between the two questions.

I ask that sincerely because all that I've heard from the blacks is their feelings about things.
That might be ok for some things but not all that ok for getting to the (higher) truths of important and now ever-increasingly urgent matters.

By way of analogy, I mean that there are loves of course, but as Steve Winwood sings, he, too, prefers the higher types.

In an exaggerated example, I will ask you to imagine that your room is on fire at this moment and the person that you are with says "the coffee cup is brown" well, that might indeed be a truth, but the more pressing realization should be that the room ---is ---on ---fire.

I'm going to reveal a very good strategy that I use for uncovering the truth within a persons (unsaid) argument, ready?

It's not so novel, you'll see.

In arguments, where everything that I'd theretofore said is not even responded to or that they've now simply shifted to their other points, I am then forced to throw in something that is obviously wrong so that when that other person suddenly but invariably calls me on it, it then actually stands to solidify everything else that I had previously argued (and even regardless of if what I had said was in fact actually true) because the trusty admission-by-omission barometer then lights up which uncovers that they indeed do have the ability to differentiate but it seems only when they want to.

Or for these specific cases, maybe it's better said "only when they are able to".

Meaning, I will argue something blah blah blah blah blah and then in the middle of the argument ---or wherever--- I will say something like "2 and 2 is 106" and that person immediately calls me on my error in math whereas with everything else that I have said it becomes glaring that they ---haven't ---even ---addressed ---it.

Nor even acknowledged it.

What does that say?
That shows that from their not being able to respond to all of the other things that I'd said before the obvious falsehood, that my other claims are ---true.

But let's see if we all can get past that and just have them address their own words as when I asked them if they prefer certain things and certain people.
(This won't hurt your brain).
And holy hell they indeed willfully agree that they do so then it's official that they, too, are merely being preferential, and as such, I wouldn't ever accuse them of being racist.

But given that, then neither should they accuse us of any racism simply for us being preferential.

Because by their own (now more thoughtful) words, it's not racism, as they (previously and thoughtlessly) have always yelled, but rather, it's obvious natural human preferential ---ism.

And I'd agree with them.

But so it's clear that this glaring schism within their argument comes from them mostly arguing from emotion rather than logic.
Am I being cold in pointing out their limitations and am I cold in using those limitations in this manner and matter?
Well according to them ---and I would also agree that--- they are very smart individuals, some of them.
I simply asked them if they have any preferences in their life regarding inanimate objects ---and also humans.
They say "but there's a difference if it's human preferentiality".
Then I have to ask them then how is it different (in regards to this exact matter)?

I continue to wait for their answer to this.

I am now going to raise an even more uncomfortable question here; when America and parts of the British colonies heartlessly enslaved certain people, what does that tell you about the people who were able to be enslaved?
Poor luck?
Largely, I think so, but let's be real honest and look into this exact situation to see if it was simply all bad luck.
Again, I will have to insert that I don't think that anybody should ever be enslaved for almost any reason but let's really look at it. I ask you to wonder about the abilities and values of the people who were enslaved as again, I will say that slavery is 100% wrong, but I am only speaking in sterile terms, right here, when I ask, do blacks have the ability to, first, be able to understand why that they were taken as slaves and secondly, do we really think blacks minds have grown and/or advanced on the whole from their African roots 500 years ago?

They value different things.
That's it and that's all.
Now again for the third or fourth time I am going to say that slavery is wrong and if I myself was enslaved I would want to kill my slave masters also (just ask the Monia) but hopefully I would understand that I was probably coming from a bad spot because ---I ---was ---enslaved.
So from that standpoint I sometimes do not feel like it is fair to critique people that have been enslaved but again I am just talking in sterile terms.
Sometimes I have not been able to sleep because in my mind something stops me as I say to myself "well the reason blacks are so limited is because they were slaves" and I feel awful critiquing them too much, but then I get to the reality that it has been that same way for blacks long before slavery came into their lives, and while there is some stubborn tendency to have forward movement, it still remains to be a continual mess.
For the fifth time I don't think slavery is right for anybody.
But...
There are differences in the (important) abilities of humans, and if they do not want to acknowledge that then they are being willfully naive and they still have not understood or even acknowledged that they also, regardless of their level of being, are preferential ---just ---like ---humans.

Lastly I am going to raise a very cheap but important point is that everybody else in society that has been taken in to be slaves has overcome or at least adapted and is doing decent enough.
And the difference is that blacks have been doing terrific and whites and others want to keep bending over backwards to keep this happening for them but their inability to understand all of the willful and loving sacrifices that have been made (as no other people have done so much to right the wrongs of the other people that they have also enslaved) and the heart felt sorrows that have been felt indicates to white people that their efforts have fallen on stubborn and/or ignorant ears.
That was the British people's reasoning about taking in Africans in the first place.
I'm not even saying too much there.
Am I?
Blacks, without hesitation, make fun of the Koreans, they make fun of whites ---and everybody else--- they hate them and they even hate all other people, too and of course when they hate white people we can understand how they would hate white people but the fact that they hate everybody shows that they are every bit just as bad as the whites and therefore ---not ---entitled ---to ---any ---special ---treatment.
Or are they the first species and race of humans that doesn't hate other people ---whatever color they might be?
I'm sorry but anybody reading this has got to see my point and evidence shows that in increasing numbers they indeed are seeing this.
But again no race should be enslaved but let's not pretend.

"Hurry before Fredrick Wilson II (Freddy boy) deletes another one of my considered replies".

Think about this, that, even though blacks vehemently disagree with me, most are at least respecting discussion enough to continue engaging in the argument with me. Most will at least take the time to show their thoughts about things but Freddy boy shows that he doesn't even respect his own followers because while he spends his time deleting me he is also (because their replies are tied to mine) deleting those people, too.

That can show nothing else but an intolerance to anybody that would even engage with anybody that doesn't agree with Freddy boy.

Speaks well as to who the real oppressor is.

It's the bad type of opportunist taking advantage of things and making the case clear that they have no ability to differentiate between what's important and what's not and he's clearly showing that while we all have feelings for our arguments, he doesn't even have an argument to go with his obvious feelings.

Feelings rather than understanding he supports. And he is the speaker for the blacks?

Well if he is not, then the more thoughtful people have to attempt to distinguish themselves from him or they will then be liable to be indicted on the same oppression charge.

Meaning to say, that, if the blacks don't take him to task for constantly deleting not only my arguments, but also their arguments, then they are every bit as culpable because if you want to even attempt to indict white people for the behavior of other white people 150 years ago, then we have every right to indict you for tacitly going along with the suppression of not only my argument but yours.

Because this is actually something that you yourself are doing whereas what you are blaming us for is something that we have never had any responsibility in unless you are simply blaming us for what people with the color of our skin did 200 years ago ---which by definition would ---make ------you ---racist.

And it seems that they themselves always claim to hate being "lumped".

Is that a hmmm?

Hmmmmm maybe it is.

Listen, slavery is a bummer but how that they cannot see what I'm presenting and how that they think it's okay to stifle others is beyond thoughtful folks and that same bullying action was partly why that they were enslaved in the first place because their continual engagement in these stifles shows that they are still a bully crew instead of a reasonable thoughtful crew.

Now, I do not believe that all blacks are acting like bullies, but if the thoughtful ones do not call out the bullies ---even and especially when they seem to be on their side--- then they are every bit just as irresponsible as the oppressors like (Freddy boy) are and therefore rightfully subject to being treated in a ---type ---of ---way.

I mean until that they stand up for free speech (and free speech for all) and for fucks sake at least free exchange between people who are clearly actually trying to understand the situation, then they could show me 150 videos per hour of white people treating black people in a type of way but it will matter not as until they are able to stipulate that there should be exchanges between everybody, their point is moot.

If they want equal rights then the first equal-ness that they need to be able to fathom is the right not just for them to be heard but rather for all to be heard.

Nothing that they say matters until they address that last point.

You'd do well to remember that.

I forgot long ago what I was supposed to remember for today.
Anyway here's me from the left.
Awwww poor baby 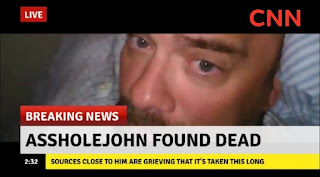